Hello, (I don't know if this is allowed if not please delete.)
I am selling some clothes and Accessoires.
If you are interested please take a look at my livejournal:

Their album, Here, Here, and Here is out now. You can get it here on iTunes.

++name: Hina
++OMG a/s/l: 17/f/SG
++ethnicity: Asian
++favorite bands: Loads.
++last concert attended: Avenged Sevenfold in SG
++why you joined: I like Jrock.
++anything else (something about you, pictures, candy, etc.):

I have a topic to open for discussion! =) if this is not allowed then by all means, please delete.
I'm currently trying to write an essay on a design idea of my choice, and naturally, being a Jrock fan, I chose Visual Kei as my design idea. I've unfortunately exhausted my brain and a lot of other resources looking for ideas, so I'd like to hear some opinions from all my fellow VK fans on LJ ;D

So if you have some time to spare, please share your comments!

Share your views in relation to
-What is VKs purpose as a design idea?
-What makes it easily recognised?
-How does it transcend the borders of time?

It doesn't matter one bit if your answers are short and stuff like that cause I'm just sourcing for outlines of ideas that I can develop on =) Thank you very much in advance!

If this is not allowed please delete.

Please take a look at my journal:

Are you a fan of Japanese music? If so, then Five For Magazine is for you, and issue #5 is now available:

This issue features the following:

have a listen, let me know what you think.  and i finally got around to uploading the album for sale, so please listen, enjoy, and purchase a few songs if they suit you.

thanks again.
these are some of my favorite records that came out this year....

++name: Alis
++OMG a/s/l: seventeen/female/CA
++ethnicity: filipino
++favorite bands (keep it short as possible, folks): nirvana, killswitch engage, i am ghost, ac/dc, atreyu, lamb of god, three days grace, etc. etc.....that's just a portion of the list...
++last concert attended: damn! it's been too long!! ><;;
++why you joined: wanna meet other asians who share the same passion for rock music as i do :)
++anything else (something about you, pictures, candy, etc.): um...i play the guitar...and i love art

Guess which guitarist of which favoritist of favorite bands in the entire world tossed
( Collapse )
into the crowd that I am so lucky to have snatched from the hands of a stage security guard shortly after it left the hands of said guitarist???
Effing blurry ass photo.  Otherwise, I wouldn't be holding your anticipation hostage...

( Collapse )
I still can't believe how much they played from S.C.I.E.N.C.E. (A Certain Shade of Green, Vitamin, and *gasp* Anti-Gravity Love Song)
And I have chills recallling all of us singing along to "Are you In?"

My third, and best, time seeing Incubus.  Although there were two things other than catching one of Mike's guitar picks, that were the best things to happen during the show.
First, about an hour or so before before Incubus went on, I noticed the main security officer summoning several of the guards to the side of the stage.  At first I thought there was a fight, or some kid who'd smoked too much that they were attending to.  But instead what, or who, do I see but Brandon Boyd slipping in side stage, wearing a white shirt, white sunglasses, and a big gorgeous grin, no more than twenty feet away from where I stood.  My heart and eyes nearly bulged from their respectives sockets, my tongue wagging like a horny cartoon wolf.  I tapped the shoulder of the girl next to me and exclaimed, "I just saw Brandon!" and pointed wildly to the right.  And as I'm lookin back who else do I see but Kilmore! wearing his dreads in a beatiful ponytail and looking towards the barely noticing crowd with a sexy smile.
F***, where was my camera trigger finger when I needed it???

The second greatest thing to happen was when during "Love Hurts," of all songs, a huge fight broke out behind me! At least five guards had to subdue these people, a man and a woman, both drunk off their asses and trying to start shit with the people around them, both at least my parent's age...
But what made it so great was that after "Love Hurts," was over, both Brandon and Mike looked over at these two and basically scolded them about this not being the place to fight, and some references to the fact that they were singing about love.  But Mike put the icing on the cake when he said, "you know, if you guys wanna fight, then you can just leave, you can just get the fuck out of here."  And then he and Brandon both motioned towards the crowd,  and Mike told the audience, "if you guys want to see these people leave, then tell them to get the fuck out," and without missing a beat all of us turned towards those people, some with our middle fingers raised, and yelled, "GET THE FUCK OUT!"  The drunk jerk *who's wife/girlfriend/whatever had been taken away by a guard*walked away looking like a jackass with his tail between his legs. Before returning to the performance, peace loving Brandon noted, "well,  I might have put it a little bit differently..." 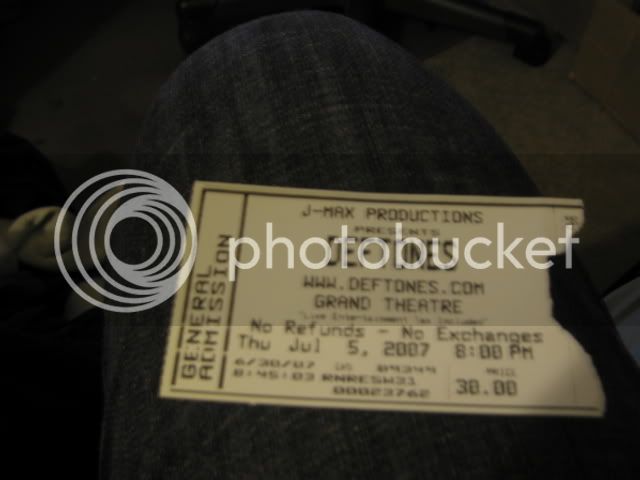 ( @The Grand Sierra Resort. The ghetto-ist of ghetto theater venues. )
scroll down a bit, they're hiding...
( and a *bad* video or two... )
Collapse